The yellow azalea is a popular garden plant which has some fine characteristics. Flowering begins as the leaves open and progresses in stages, so the flowering period is long. The blossoms are strongly scented and even just a few shrubs in a garden give an impression of southern lands. Yellow azalea is very adaptable and is usually extremely hardy, its native habitat being mainly very continental in climate. Further, it can spread through root suckers, which is rare among Rhododendron species.

The old Finnish saying, ”beneath the most beautiful rose lies hidden a sharp thorn” is also true for the yellow azalea, which is poisonous to humans, containing grayanotoxin. Xenophon, the author and military leader from ancient Greece, mentions in his work “Anabasis” a strange illness which affected his troops when they were in what is now Kurdistan. The local people were aware they had to avoid using “mad honey”, but the troops from faraway Greece new nothing of this. The honey they collected was from yellow azalea, whose poisonous nectar the local bees specialise in collecting. However, after some suffering, the soldiers recovered and yellow azalea passed into the annals of military history. 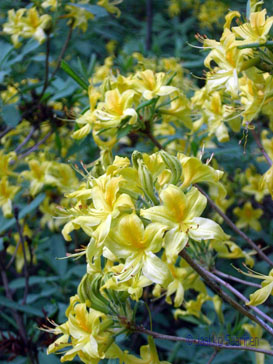