Schlippenbach’s azalea is one of the commonest shrubs of the open oak and pine forests of the Korean mountains, extending above the tree-line. One of the most beautiful of the azaleas, it is also highly valued even in those countries where many azalea species thrive which are tender in Finland. It also tolerates chalk soils better than most of its relatives.

The deciduous Schlippenbach’s azalea varies in height, growing fairly erect but with curving upper branches, rather like the ash. The broad rather diamond-shaped leaves cluster attractively at the branch tips, and turn orange to red in autumn. At the end of May the large, broad, open flowers bloom at the same time as (or just before) leaf burst, depending on provenance. The flowers are a pale rose-red, with reddish-brown spots.

This species has been considered rather tender and demanding. However, the Mustila shrubs have grown well on Pohjoisrinne (Northern Slope) in ordinary heath forest soils. The plantings include several provenances from the 1976 collecting expedition to South Korea, so there is variation between individual shrubs as to size, flowers, and rhythm. The Northern Slope warms slowly in spring, so the early and frost-tender flowers bloom excellently most years. In sunny, warm spots the species suffers easily from spring frosts, so when planting in gardens it is wise to place them on the north sides of buildings, for example. 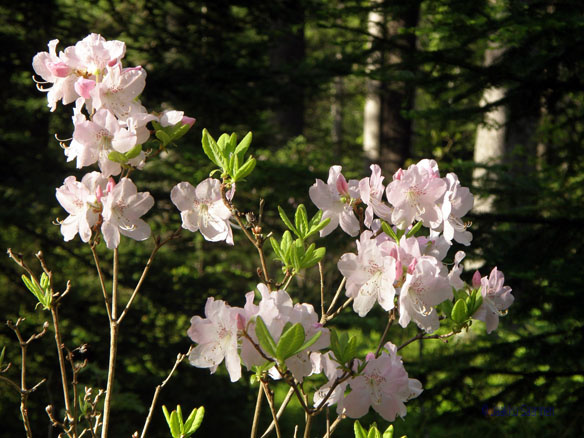