The Norway spruce is the second commonest tree species in Finland. When the continental glaciers thawed and withdrew, the spruce was the last tree species to spread into the country, from the east rather than from the west, which is where most Finnish species have come from. About 5000 years ago the cooling climate and increasing humidity favoured the spruce over its rival broadleaf species, which had arrived much earlier. The current limit was achieved about 3000 years ago, the tree-line for spruce being at slightly lower altitudes and latitudes than for Scots pine (Pinus sylvestris).

The range of the Norway spruce is enormous, from the Atlantic coast in the west to Amur in the Russian Far East. The Siberian spruce (Picea obovata or Picea abies subsp. obovata) of northern Europe and Siberia is considered by some to be an independent species, by others a subspecies. It has adapted to a more continental, colder climate and less fertile soils; it differs from the Norway spruce only slightly: the cones of the Siberian are shorter with rounder scales; those of the Norway longer with more pointed scales. Most of the trees growing in Finland are of an intermediate form, Picea abies subsp. × fennica.

Spruce was one of the main tree species on the Northern Slope of what we now know as Arboretum Mustila before the founding of the Arboretum. Some of these stands - now over a century old - still exist, creating an ”old-growth” atmosphere. But since the beginning of the millennium some old stands have also been lost. As they gradually reach their natural age-limit they become susceptible to various diseases.

Spruce were also planted in the Arboretum’s early days to allow comparisons with exotic conifers. Most of them were of Finnish provenance, but the stand growing below Terassi (Terrace) is of true Siberian spruce, from Tomsk in western Siberia. 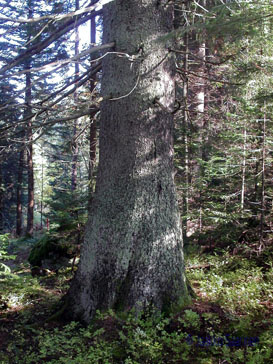